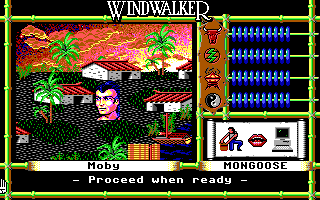 Windwalker was a simple and fun CRPG I played on my Commodore Amiga 500 back in 1990.  The game world was in an Asian fantasy settings, included a lot of spirituality, kung-fu fighting, a little Zen, a little Taoism, Shamanism, Deism, some Idolatry, black magic, a pretty Princess, a sick Emperor, an Evil Warlord, and a lot more.

Windwalker didn’t have a particularly fetching game box cover, but it was a game I often looked at when visiting some local game stores, but never purchased.  Then, in 1990 my mother asked me what I wanted for Christmas, and I said “Windwalker“.  So she bought it, wrapped it in beautiful Christmas paper, and tossed it under the tree a couple weeks before Christmas. 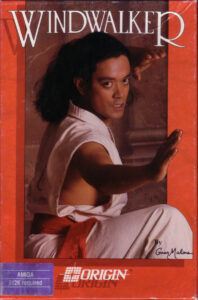 I have some guilt on my conscious when it comes to Windwalker, and I have a confession to make that I never told anyone.  Ready to hear it?  Then keep reading.

A few days after my mother had wrapped and placed Windwalker under the tree I did something naughty.  I secretly opened the wrapping on the end.  Then I slid the game box out of its wrapping and opened the box.  I pulled out the game manual and the single game disk, and replaced them with a blank disk and a game booklet from another game into the box.  Then I slid it the Windwalker game box back into the wrapping and re-taped it shut.

Over the next several days before Christmas I was playing Windwalker on my Amiga 500 in bedroom.

Windwalker, from what I remember, was not a hard game nor a long game.  With that said I never did beat it.  As I neared what I felt was the game’s end my guilty conscious was kicking into overdrive.  A day or two before Christmas I stopped playing Windwalker completely.

Christmas Eve is was when my family opened presents.  I went through all the motions of opening and examining the game box and acting excited to play Windwalker.

And I never played it again.  I never told a single person about what I had done.  For the record I have never done such a thing since then, and never will.  I actually like the mystery of Christmas presents and enjoy opening them on Christmas Morning.

In an effort to clear my conscious I am writing this blog post and will be sharing this story on my YouTube channel as well.  However, there is more.  Christmas Eve 2020 is tomorrow night, and I plan to tell my mother what I did.  Confession is good for the soul!

From 1990 to 2020, it will have been thirty years since my nefarious deed was performed.  Thirty years ago I played Windwalker, and then walked away from playing Windwalker.

I think I would like to play and win Windwalker.

Windwalker was the brain child of Greg Malone, and was the sequel to his previous game Moebius: The Orb Of Celestial Harmony.  It was developed and published by Origin Systems. 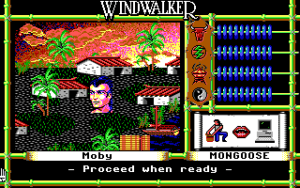 My next video game Long Play series will be Windwalker on the Commodore Amiga 500.  It seems only fitting given that it is the thirtieth anniversary of my sin.  I will confess, and then I will play, and then I will win.

Adventure! Here There Be Dragons!