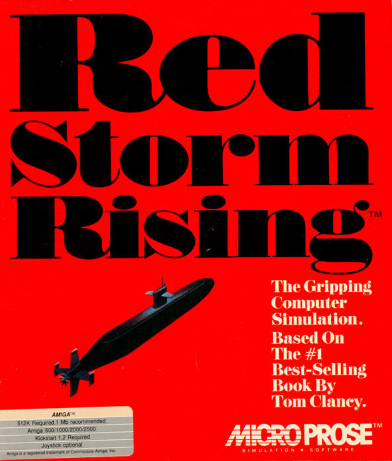 Red Storm Rising is a fantastic submarine simulator set in the midst of what could easily become World War III.  The game is based on a Tim Clancy novel of the same name, and centers around a particular story line in the book involving the U.S.S. Chicago, a nuclear attack submarine in the Norwegian Sea Theater.

In my latest YouTube video I play a Red Storm Rising combat scenario where I control a submarine attacking a Soviet Carrier Task Force.  I play using an emulated Amiga 1200 using Cloanto’s software package, which you can find a link for on my link page.

You take on the roll of an attack submarine captain across a variety of United States flagged submarines, from the older Permit class to the newer (at the time the game was out) Seawolf class.  You can participate in single action scenarios or play a full war campaign at sea.  Both options are a lot of fun.

This game was first given me to by my father when we have a Commodore 64 in house.  It was a surprise to me that he would give me a game… that wasn’t like him.  Most of the games I had were purchased through my mother or by me.  But then, my dad and I had an interest in the Navy, so I can see why he would get my a naval submarine combat simulator.

A little back story on my dad: He served in the Navy on the U.S.S. Valley Forge in Vietnam.  After the war he went into Federal Employment working for the V.A..  He would later join the Army Reserves and then a few years later transferred back to the Navy and served in the reserves there for many years.  He served on many ships during his time as a Naval Officer, mostly Fleet Support, but even a short stint on the U.S.S. Wisconsin, The largest of the Iowa Class Battleships, a year before it was decommissioned for the second time.

I myself never served in the military, but did spend some time as a Merchant Marine working on American Flagged Vessels and was a member of the Sea Lift Command.

I’ve always had a love for all things naval.

I enjoyed Red Storm Rising so much on the Commodore 64 that when I got an Amiga 500 I had to purchase the game for that system as well.