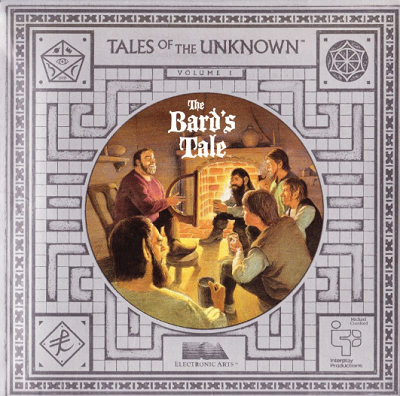 How And When I Became A Gamer

I know when I became a gamer.  It was like a switch was flipped on inside me.  I want to share the story here with you now.  You’ll laugh, you’ll cry, you’ve probably have had a similar experience.  I would leave to hear when the flip was switched on inside you below in the comments.

From 1981 until 1985 I was pretty content with having an Atari 2600.  While it didn’t get used too much I did enjoy playing games on it with friends.

In 1984 my parents got a TRS 80 Color Computer III for my sister and I to use to write reports for school.  I didn’t give a damn for the TRS 80.  It pretty much sat and collected dust.  I do recall seeing a few games for it at Radio Shack but I was not interested in gaming, yet.

Then Along Came The Commodore 64

It was late 1985 when I went over to spend the day with a cousin who lived a few blocks away.  His family had a Commodore 64 (C64) and he showed it to me by loading up and playing Bruce Lee, a C64 classic by today’s standards, designed and published by Datasoft.

I had a really good time messing around on my cousin’s C64.  A few other games we played on it were Beach Head II, Impossible Mission, and Mail Order Monsters, and Super Sleuths.  While I do recall having a lot of fun and going back the next few weeks to play those games again, I do not recall thinking that I wanted to get a C64 of my own.

But that would change.

It was early 1986 when I went over to a neighborhood friend’s house.  Had had a C64 and a game he was telling me about called Way of the Exploding Fist that he wanted to show me.  This friend would later help form Upstairs Room Software.  His nickname was The Rook.  We spent an hour messing around with his new game, plus another game he had called Conan, which was based on the character Conan that Robert E. Howard wrote so much about.

Then something happened; he loaded up a game called The Bard’s Tale: Tales of the Unknown.  It was a boot legged copy he got from a relative. 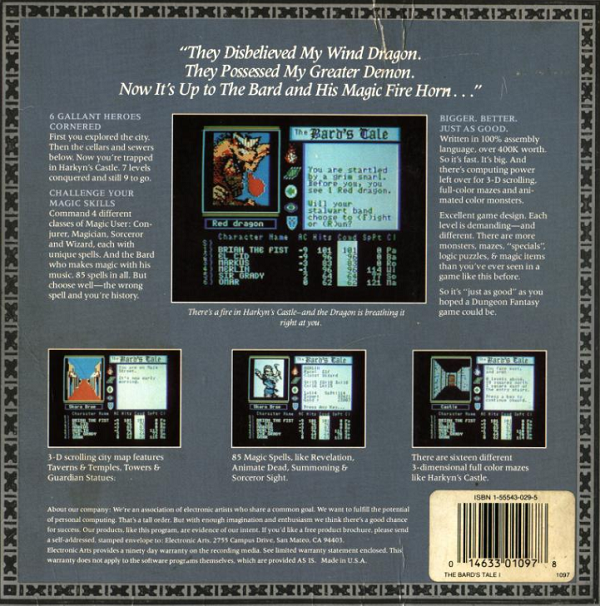 The Bard’s Tale: Tales of the Unknown back of the game box.

Within the first five minutes of sitting there watching my friend play The Bard’s Tale I knew I had to get a C64 of my own.  I became totally infatuated with that game.  It was at that moment that I became a gamer.

What Was It About The Bard’s Tale?

What I really loved was the exploring that could be done in that game; the dark dank wine cellars under taverns, sewers, mysterious wizard towers, foreboding fortresses… the entire games smacked of adventure and mystery.  There were traps in the dungeons, puzzles to solve, hordes of monsters to be defeated, treasure to be won through arduous victory… all of it captivated my imagination.

My buddy, The Rook, didn’t have the game manual, didn’t have a map of the city, didn’t know important locations aside from Garth’s and The Scarlet Bard Tavern.  We wandered his party of characters around the city streets without much of a clue as to what to do.  We didn’t even know any of the spells casting codes.

But besides all those setbacks we both discovered a love for the game.  The Rook was lucky… he could play it whenever he desired.

Within a couple days of playing that game I managed to get a copy of it from my friend.  I didn’t have a C64 to play it on, but I had my own game disks.  Copying games, illegally, was a regular thing for anyone who owned a C64.  I’ll be sure to write about that someday soon.

Later that year after much frustration of playing The Bard’s Tale at my friends house (this was before I got my own Commodore) and not knowing the spell codes or other pertinent information, I broke my mother down and got her to purchase an original copy.

A Gamer Was Born

I fell on love with The Bard’s Tale: Tales of the Unknown that day in early 1986.  That was the day a large portion of my life would be defined.  From that day forward I was a gamer.

When do you first become a gamer?  Can you pinpoint a specefic event in your life like I can?  Tell me about it below.  Was it a game?  Was it a good friend that introduced you to the hobby?